“Therefore, since we are surrounded by such a huge crowd of witnesses to the life of faith, let us strip off every weight that slows us down, especially the sin that so easily trips us up. And let us run with endurance the race God has set before us. We do this by keeping our eyes on Jesus, the champion who initiates and perfects our faith. Because of the joy awaiting Him, He endured the cross, disregarding its shame. Now He is seated in the place of honor beside God’s throne. Think of all the hostility He endured from sinful people; then you won’t become weary and give up the race” (Heb 12:1-3)
As a child in Romania, I used to skate on ice and I loved it. Up till today, I like watching ice skating competitions. Two days ago, something strange happened during the Winter Olympics in South Korea.
Gabriella Papadakis and Guillaume Cizeron of France were dancing on ice. They are the present champions in Europe. Each dancing program is about three minutes. They were doing very well, focusing to win a medal. But two minutes into the program, an accident happened. As they were dancing on ice, the clasp holding the neck piece of Gabriella’s dress got broken. The right breast got exposed. If such an accident happens at home, it is bad. But in the view of thousands seated on the stadium and more than six millions people watching on TV, that thing is terrible. Like many people watching, I felt so bad for her. But guess what? They continued to dance to the end like nothing bad happened. At last, they won the silver medal! After the program she wept saying that she was so embarrassed. But she also said that she had a choice to make in a spilt of second. The natural and easiest choice was to stop the dance, weep in embarrassment and run away from the ice ring. That will mean total failure for both of them. All their dreams about being Olympic champions could have died there. The other choice was to ignore the shame and finish the race. Though partially naked and embarrassed they finished their program. The thought of being the champions in the future was stronger than the present shame. What a lesson! These are true champions in sport!
Children of God, there are great lessons here for all of us. Can we fight shame? Can we continue the good thing we have been doing even in the presence of a second of failure? Is your reputation among men a stronghold in you? How much do you desire to finish the Christian race well? How much are you ready to pay for the reward God has promised you in the future? How much are you ready to suffer for Christ’ sake? To become a champion is not a matter of seconds. There is much preparation of body, soul and spirit before you become a hero! There are few leaders but many followers. There are few heroes but many admirers. ‘There are many teachers but few fathers’- said Paul! To be a role model, to be a hero, to be an inspiration to many, a father or a mother in Christ, there is a great price to pay! Are you willing to pay for it? Jesus was rejected by men and He was crucified naked! He endured shame on our behalf! He died for us! Jesus scorned that shame for the joy ahead! We share now in His joy! Jesus is our Lord! Jesus is our Champion! Be like Jesus! Do like Jesus! Let nothing stop you from worshipping the Lord! Let nothing stop you from serving God! Your present pain cannot compare with the future glory God has promised to give to you. Stop being jealous on others! Pay the price for the shine, then rise and shine! Glory to God!
“Therefore do not be ashamed of the testimony of our Lord, nor of me His prisoner, but share with me in the sufferings for the gospel according to the power of God, who has saved us and called us with a holy calling… For this reason I also suffer these things; nevertheless I am not ashamed, for I know whom I have believed and am persuaded that He is able to keep what I have committed to Him until that Day” (2Tim 1:8-12)
(In the picture Gabriella Papadakis and Guillaume Cizeron the moment the dress ‘accident’ happened and later on the podium with their medals) 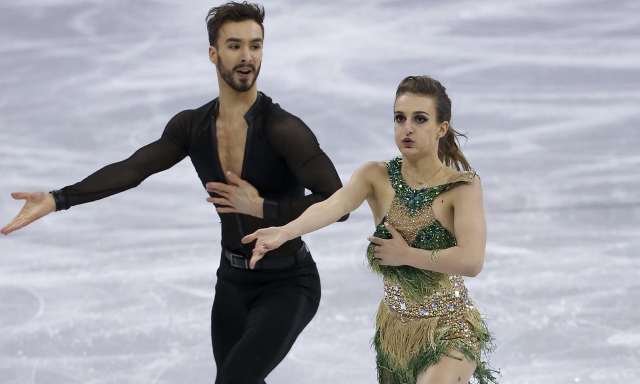 3 comments on “BE A CHAMPION!”