Aaron Burr Jr. (1756 – 1836) was an American politician and lawyer. He was the third vice president of the United States (1801–1805), serving during President Thomas Jefferson’s first term. Burr served as a Continental Army officer in the American Revolutionary War, after which he became a successful lawyer and politician. He was elected twice to the New York State Assembly; he was appointed New York State Attorney General; he was chosen as a U.S. senator from the State of New York. He reached the apex of his career as vice president. Burr shot his political rival Alexander Hamilton in a famous gun duel in 1804, the last full year of his single term as vice president. He was never tried for the illegal duel and all charges against him were eventually dropped, but Hamilton’s death ended Burr’s political career. Burr left Washington, D.C., and traveled west seeking new opportunities, both economic and political. His activities eventually led to his arrest on charges of treason in 1807. The subsequent trial resulted in acquittal, but Burr’s western schemes left him with large debts and few influential friends. In a final quest for grand opportunities, he left the United States for Europe. He remained overseas until 1812, when he returned to the United States to practice law in New York City, where he spent the rest of his life in relative obscurity. He was a known womanizer. He wrote books about his sexual exploits. He had many children with different women (white and black). He adopted them all to be legally his. He married two times. Each of his wives were rich widows who brought a lot of money to him.

According to the world, this is the story of a great man. He was educated, rich and famous. The sad part of his life story is not always told. He came from a great Christian family. His maternal grandfather was Jonathan Edwards, the greatest American Theologian. Burr’s father was a true man of God, a pastor. Burr’s parents died when he was a child. He grew up with his uncles, also committed Christian men. When Burr was 19, and a student at Yale College, an evangelist preached the Gospel and made an altar call. many students gave their lives to Christ. Burr was among them. They were told to go to the next room so that they will be told about the basics of Christianity. As Burr was following the students, somebody pointed at him and said: ‘See, Jonathan Edwards’ grand son has answered an altar call’. Burr was ashamed and went home. He later openly rejected the faith of his grandparents and parents. He died in a hotel. He died as an unbeliever. He was buried near his father in Princeton, New Jersey.

This true story is a warning against pride! It is possible to be rich and famous and go to hell. It is possible to live a long and successful life and still die as a reprobate. Dear friend, please humble yourself and come to Jesus! Sinner, backslider, come home! There is room at the Cross for you! Jesus is calling you!

Our Lord said: “For what profit is it to a man if he gains the whole world, and loses his own soul? Or what will a man give in exchange for his soul?” (Mt 16:26)

(In the picture, Aaron Burr and his tomb in Princeton Cemetery) 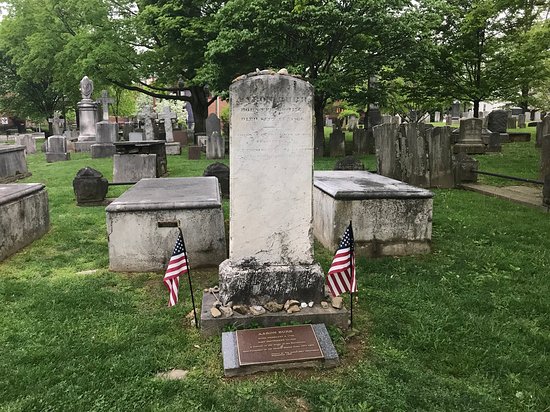