“Then the word of the Lord came to Elijah: “Leave here, turn eastward and hide in the Kerith Ravine, east of the Jordan. You will drink from the brook, and I have directed the ravens to supply you with food there.” So he did what the Lord had told him. He went to the Kerith Ravine, east of the Jordan, and stayed there. The ravens brought him bread and meat in the morning and bread and meat in the evening, and he drank from the brook” (1Kg 17:2-6)
Some time ago I read about this story. It was from a sermon titled ‘Elijah, the secret of his power’ preached by Rev. Al Martin. There was a very cold snowy winter night in a village in Germany. A single mother and her 7 years old son were alone in the house. They had no food and no wood for the fire. They were hungry, cold and afraid. The mother was a Christian. Few days previously she read the story of Elijah to her son. Their situation was now desperate. She told her son; ‘Let’s pray for a miracle…’ They knelt on the cold floor shivering. Suddenly, the boy got up and ran towards the door. He opened it widely. The cold air from outside rushed in and the room became freezing. The mother shouted: ‘Son, why do you open the door on such a cold night? You are making the matters worst…’ Joyfully, the boy replied: ‘It is for the ravens, mummy, so that they can come in and bring bread…’ With simple faith, the boy trusted that God will provide for them the way He provided for the Prophet Elijah. As the cold wind was blowing in the house, the mother struggled with doubt a bit… She was thinking about closing the door to protect the little warmth they had, when suddenly, a man appeared at the door. He was the mayor of the village. He said that he decided to go round the village to see if anyone needs help. He asked what the matter is. Why is their door opened? The mother explained to him their situation and the faith of her son that ravens will come to help them. The mayor said: ‘I will be your raven both now and forever’. Immediately he made sure that they were well provided for. He later married the woman and adopted her son. Praise the Lord!
What are the lessons? Have faith in God! You are never alone! Pray! Act in faith! God will surely answer! He will give you more than you imagine! Let God’s ravens meet you today! Be encouraged! 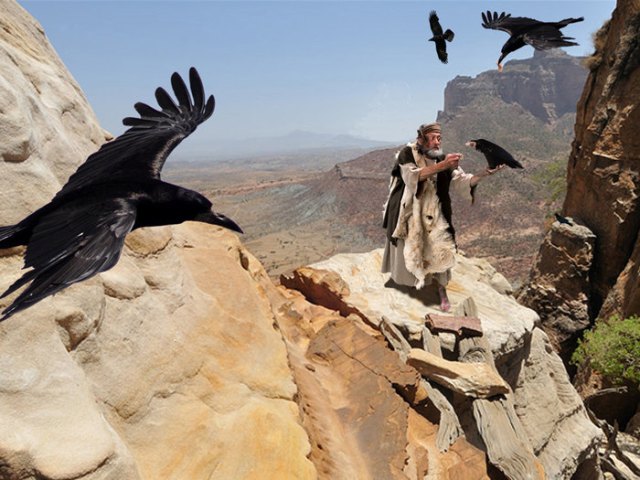